The EPA web page you have selected may be unavailable on Thursday, January 23, 2020 starting at 8:00 pm Eastern Time (ET) through 10:00 pm ET. We apologize for any inconvenience this may cause.

﻿The ABC One-Hour Cleaners Site (the Site) is located at 2127 Lejeune Boulevard in Jacksonville, Onslow County, North Carolina within the County’s commercial retail district. The one-acre Site is located approximately two miles southeast of Camp Lejeune Marine Corps Base. Tarawa Terrace, a property located south of the Site, serves as a housing community for non-commissioned officers assigned to the Camp Lejeune Marine Corps Base. From 1964 to 2005, ABC One-Hour ﻿Cleaners served as a small family-owned dry cleaning business. The ABC One-Hour Cleaners consisted of three buildings that housed separate activities. In 2005, the business was sold and renamed as A-1 Cleaners where it served only as a drop-off location. All operations were terminated in 2011. Since 2017, the three buildings were demolished leaving only the concrete foundation.

How did the Site become Contaminated?

Tetrachloroethylene (PCE), a common dry cleaning solvent, was used as a part of the operations. The majority of the dry cleaning operations were conducted in the middle building where the septic tank system and washer were located. PCE is a clear liquid that is used to remove stains. After so many uses, PCE residue can be found as either a solid or liquid. For over 40 years, both the solid and liquid forms of PCE were improperly disposed of in the following manners:

What Impact did the Improper Disposal Activities have on the Site and the Environment?

﻿In 1989, the EPA and North Carolina Department of Environment and Natural Resources (NCDENR, now the North Carolina Department of Environmental Quality or "NCDEQ"), identified approximately one ton of PCE in the soil and concentrations of PCE and other contaminants of concern (COCs) in the groundwater and soil that were not acceptable to public health and the environment. The COCs identified at the Site include:

What Happened to the Site Once it became Contaminated?

The Site was placed on the Superfund Program’s National Priorities List (NPL) in 1989 where more extensive investigations were conducted to determine exactly how deep and far the groundwater and soil contamination extends. To better understand how to manage the contamination, the EPA establsihed two Operable Units (OUs): OU1, which addressed the groundwater contamination and OU2, the soil contamination. The findings from these investigations were included in the 1994 Remedial Investigation and Feasibility Study which determined the most appropriate cleanup methods to address the soil and groundwater contamination were Soil Vapor Extraction (SVE) and pump-and-treat with monitored natural attenuation (pump-and-treat), respectively. By 2000, the two cleanup methods were constructed and operating as prescribed in the OU1 and OU2 Records of Decision. Both cleanup methods operated until 2011.

What Has Been Done to Clean Up the Site?

The Comprehensive Environmental Response, Compensation, and Liability Act (CERCLA) Cleanup Process involves a number of stages beginning with determining what is contaminated (i.e. the soil, groundwater, surface water, etc.) and the extent of the contamination (i.e. how deep and far the contamination may extend). The CERCLA process ends when the contamination has been addressed and the site conditions are protective of the public's health.

﻿At the ABC One-Hour Cleaners Site, contamination was identified in the soil and groundwater. In 1992, the EPA conducted a Remedial Investigation and Feasibility Study where the soil and groundwater were evaluated to determine the most appropriate cleanup methods to address the contamination. To better manage these determinations, the Site was divided into two operable units (OUs), OU-1 and OU-2. OU-1 focused on the groundwater contamination and OU-2 the soil contamination. Table 1, Previous EPA CERCLA Milestones and EPA's Involvement at the ABC One-Hour Cleaners Site, provides a basic description of each of the CERCLA milestones, outcomes, and year the milestone was achieved.

What Is the Current Site Status?

Does the Contaminated Soil Impact the Groundwater?

Where is the Source Material?

What are the Other Impacts of Source Material? What is EPA Anticipating to do to Address the Contamination?

Based on the determinations gathered during the 2018 Remedial Investigation, EPA merged OU1 and OU2 into one newly established OU, OU3, which applies to both soil and groundwater. In September 2018, EPA issued the Interim Action Record of Decision for Soils at the ABC One-Hour Cleaners Site where the determination was made to address only the soil contamination first. This determination was based on the influence the source material has on the underlying groundwater and the conditions of neighboring properties. In addressing the soil contamination before the groundwater, the source material will be removed which will shrink the contaminated groundwater plume and 'smear zone'. The source material cleanup efforts will be conducted in two phases:

Phase 1: Excavating Areas Where Source Materaial Was Directly Buried and Disposed (Fall of 2019)

﻿The former middle building housed the dry cleaning operations and consequently, the PCE discharges. Based on interviews conducted by the owners of the ABC One-Hour Cleaners and data collected from soil sampling activities, the highest PCE concentrations were detected, more specifically, near the septic tank system and washer where the PCE was directly discharged and buried. EPA will, at this time, only remove the septic tank system and surrounding soil. The excavated area will be backfilled. To prevent traffic coming onto the Site, EPA will construct a fence around the perimeter of the footprint of the former building.

﻿Phase 2:  Addressing All Contaminated Soil (To be Determined When Funding is Available) 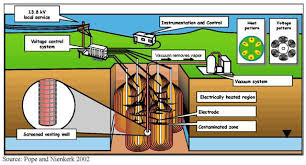 What Measures will EPA Consider to Determine if the Soil Contamination has been Addressed?

EPA establishes Remedial Action Objectives (RAOs). RAOs are specific goals that ensure the protection of human health and the environment. The RAOs for the soil cleanup were developed based on the current and reasonably anticipated future land use (commercial). The RAOs are:

RAO 2: Reduce or eliminate long-term migration of contaminated soil into the groundwater.

W﻿hat Activities are Currently being Conducted at the Site?

The selected soil cleanup method is currently being designed and is anticipated to be constructed in once funding is available. EPA is anticipating to conduct a Vapor Intrusion Study in neighboring buildings that are located above or near source material to ensure public health is protected.

ANTICIPATED DESIGN AND CONSTRUCTION ACTIVITIES FOR THE SOIL CLEANUP METHOD

Activity and Use Limitations

At this site, activity and use limitations that EPA calls institutional controls are in place. Institutional controls play an important role in site remedies because they reduce exposure to contamination by limiting land or resource use. They also guide human behavior. For instance, zoning restrictions prevent land uses – such as residential uses – that are not consistent with the level of cleanup.

EPA uses a number of methods to protect human health and the environment. In addition to physically cleaning the contamination from a Site, EPA also uses more administrative tools that may serve the purpose of restricting access to a contaminated area or prohibiting the use of contaminated groundwater for consumption. These tools are called Institutional Controls (ICs). For the ABC One-Hour Cleaners Superfund Site, a restriction will be placed on the Site property. This restriction will do the following:

Once the RAOs and cleanup levels have been achieved by the selected soil remedy and removal efforts, the ICs will be revised appopriately.

A number of sampling events have been conducted at the Site and neighboring properties to determine the PCE levels in the soil and groundwater so that a more appropriate cleanup method is selected and designed. These sampling efforts ﻿have been conducted since 2011 ﻿and will be completed by the Spring 2019. Data gathered from the sampling events determined that PCE contamination ﻿remains in the soil at the Site and extends from the surface to approximately 65 feet below ground surface. Groundwater contamination was detected at a depth of 150 feet below ground surface at the Site. The groundwater plume, however, extends from the Site eastward for approximately one mile. The following types of sampling efforts have been conducted from 2011 to 2019:

Hand Augering:  The majority of the soil samples were collected using a hand aurgering method to depths of 0 to ten feet below ground surface. Four sampling events using a hand auger were conducted within the 2011-2019 timeframe.

Membrane Interface Probing:  Two sampling events have involved the use of Membrane Interface Probing (MIP). MIP samples were collected from the Site and several properties located within 0.5 miles from the Site. MIP sampling methods evaluated the soil and sediment (soil that is in contact with groundwater) to approximately 150 feet below ground surface.

Installation and Sampling Groundwater Monitoring Wells:  ﻿A total of ten cluster wells (two wells that are installed at different depths and are located close to each other)

EPA is creating opportunities for cleaner, greener ways to manage the contamination at its hazardous waste sites. Such ways include minimizing fuel usage for vehicles used by the EPA and EPA contractors as well as the machinery used to sample and clean contamination; methods used to clean the contaminated sites; and volume of water used to operate groundwater machinery. For the ABC One-Hour Cleaners Superfund Site, cleaner, greener methods have been adopted during the development of the Focused Remedial Investigation. Below is a summary of the newly adopted methods and how much money and energy have been saved because of them:

The total cost savings that has been recorded from 2015 to 2019 is approximatelty $7,500. Efforts to continue practicing cleaner, greener ways to address the Site’s contamination will be made throughout the life of the cleanup efforts and will be shared publicly. For more information about EPA and its cleaner, greener remediation efforts, please visit:  https://www.epa.gov/superfund/superfund-green-remediation.